Kayak fishing has revolutionized the way anglers are able to fish in many parts of the world. Instead of having to rely on larger boats or their own two feet to get them to the best possible fishing spots, a quality fishing kayak will allow you to reach areas of certain waterways that have previously been unexplored by fishermen and women.

If you’re just getting into kayak fishing or are interested in this activity, it’s important that you purchase the right type of kayak that will allow you to stand up and fish without putting you at a great risk of tipping the boat over. We’ve compiled this stand up fishing kayak buyer’s guide to help explain some of the key aspects that you need to look for when shopping for the right fishing kayak. 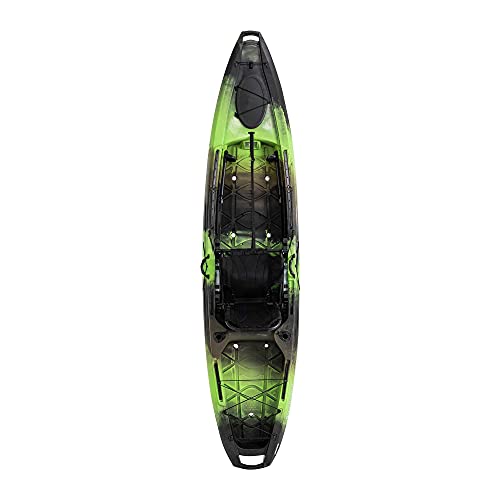 Most of the top brands in the outdoor industry recognize the demand for fishing kayaks and how the sport has exploded in popularity over the last several years. The traditional sit-inside kayak models are simply not suitable for anglers to fish out of because it’s virtually impossible to stand up while you’re on the water inside one of these boats.

The best option for any angler is likely going to be a sit-on-top kayak model. This type of kayak allows you to sit in a comfortable seat that’s often elevated to a level that won’t make your legs feel cramped. These sit-on-top kayaks are typically made of rotomolded plastic, which allows the manufacturer to create a stable hull design that makes it easy for the user to stand up and fish without any issues.

Many of the best manufacturers in the kayak industry have made significant breakthroughs in recent years when it comes to producing kayaks that are incredibly stable and capable of getting you where you want to be on most waterways.

When shopping for your stand up fishing kayak, it’s crucial to understand that you’re probably going to have to spend more money to purchase the better options. As with any other item when it comes to fishing or outdoor gear, you’re going to get what you pay for and it’s usually wise to invest more money if you want to have the best possible quality.

The most important thing you’ll want to look for during your quest to buy a stand up fishing kayak is one that offers plenty of stability. Most fishing kayaks that are produced today offer very wide hulls of at least 34 inches or more. This increased width translates into greater stability on the water.

If you know anything about kayaks, or virtually any type of vessel, you’re likely well-aware that having a boat that’s short and wide will give you better overall stability, but will certainly slow the kayak down considerably in terms of speed. Most kayak anglers are not concerned with having the fastest boat on the water, but are instead focused on having a kayak that will allow them to stand up and perform other movements without compromising this stability.

Primary stability basically refers to the kayak’s ability to remain stable when you’re on flat water. This primary stability comes from the hull design that places most of the weight dispersion on the middle of the kayak.

It’s recommended that beginners and novice kayak anglers select a kayak that offers more primary stability than secondary. The simple explanation for this is that you’ll have more stability when standing on the kayak as long as you don’t move around too much or venture out on choppy, unstable water.

Secondary stability refers to the kayak’s ability to withstand weight being placed on the outer edges of the boat without tipping over. This is a result of the kayak’s hull design and whether a kayak is built to handle rough water as opposed to calm, flat waters.

A kayak that offers more secondary stability might initially feel more ‘tippy’ and wobbly than one with better primary stability simply because it’s made to deal with rough water. More experienced kayak anglers know that it’s extremely important to have a kayak with good secondary stability if they plan to fish along fast-moving rivers or coastal waters where it can get quite choppy.

There are a few different hull designs that are more prominent when it comes to stand up fishing kayaks. These include flat, rounded, pontoon and V-shaped hulls. Each one offers their own specific set of advantages and downsides.

The flat hull is the best option for anglers who plan to use their kayak to fish on large lakes and reservoirs, or even slow-moving rivers, where the water is usually very calm. This hull design is not a good choice for fishing on rough water as you’re going to be more likely to tip over or have very little overall stability.

A kayak that is made with a V-shaped hull will usually have less stability, but is built to cut through the water with relative ease. These kayaks are often built to offer more speed than stability and are not the best choice for any kayak angler.

A round hull design is one that has some of the same capabilities that you’ll find in a V-shaped hull, but with greater overall primary stability. Most stand up fishing kayaks are made with a rounded hull that will let you feel more comfortable when standing up, yet won’t require you to sacrifice too much speed in the process.

The pontoon style hull is one that has very high levels of stability and will be a great option for any angler who might be larger in size—both height and weight. You’ll also get a decent amount of secondary stability that will allow you to fish in more unstable water, as well as calm waters.

When it comes to looking for a kayak that will let you confidently stand up and fish without risk of tipping over, you’re going to be much better served by a boat that has a spacious, flat deck. This will allow you to stand up and position your feet in any way you need to without compromising the kayak’s stability in the process.

Having a deck that is made with many small storage wells or ridges makes it hard to stand in for most anglers. It’s much better to have a flat deck that is equipped with a dry storage hatch beneath where you can stash any valuable gear that you don’t want to get wet.

There are a number of other aspects you might want to take into consideration when it comes to selecting the kayak that’s just right for your own needs. However, when it comes to picking out a kayak that will let you stand up and fish comfortably, these areas of interest that we have mentioned in this article are the most important parts that you should take into consideration, first and foremost.

Once you have narrowed down your selections to a few kayaks that offer the right kind of width, stability and hull design, you’ll be able to better compare them based on other features and characteristics that will offer just what you need.