Chatterbaits are popular and versatile lures beloved by pros and amateurs. Find out how and when to use a chatterbait here in this guide!

The first chatterbait lure reached the market in 2004. It was created by father and son team Ronny and Ron Davis, who had been working on prototypes of bladed jigs. Their first prototype featured a lead jig and a hexagonal-shaped metal blade. But it’s only once the lure was used in fishing competitions, including the Bassmaster Classic in 2005, that the public noticed its unique vibrating properties in the water. In 2006, Z-Man Fishing patented the original ChatterBait. By this point, the public already knew about the lure.

It’s precisely the sound component that elevates chatterbait fishing for anglers of all levels and backgrounds. Anglers reckon that chatterbaits can significantly increase your success on a bass fishing outing, whether you are doing it for pleasure or as part of a sporting event. Therefore, it makes sense to learn more about this remarkable bass fishing lure and its unique properties.

Anglers need to consider how the choice of blade, size, and color will affect their chatterbait lure. Different blades produce different vibrations, so you want to experiment with squared-off corners, rounded corners, and bent blades for each location. The size of the lure depends on the depth and movement you need and the size of the fish you want to catch. Chatterbaits of 1/2oz are the standard choice for areas 1 to 8 feet deep. You’ll have to downsize to 3/8oz or 1/4oz if the lure gets hung on the grass and structure. Upsize to 3/4oz to 1oz to reach below 10 feet.

Your choice of color will depend on the seasonality and baits. Typically, anglers use the following lure colors:

What is Chatterbait Fishing?

Chatterbaits are a relatively new phenomenon in bass fishing. Yet it’s rapidly gained in popularity after professional anglers used the lure to win tournaments in the late 2000s. A large part of the success and appeal for this bass fishing lure lies in its versatility. Professional fishing events have rapidly demonstrated the effectiveness of chatterbaits as pro anglers such as Brett Hite and Bryan Thrift used them as part of their winning gear. But what makes the fishing lure truly extraordinary for amateurs and enthusiasts alike is the fact that you can use it in a variety of different situations and ways. Anglers of varying levels and experiences across the United States can all use chatterbait fishing and be successful, making the lure one of the most accessible pieces of bass fishing kit.

In essence, chatterbaits are very similar to spinnerbaits. They consist of a lead jig head, a colored skirt attached off the backend, and a blade attached to the front. You can also find chatterbaits that include a willow leaf style blade attached to the bottom of the head, for added vibration. This can make it tricky to differentiate from spinnerbaits for lesser experienced anglers. You would typically found chatterbait lures under their patented name ChatterBait, but they also exist on the shelves under different descriptions: Bladed Swim Jig or Bivrating Jig are some of the most frequently used. Therefore, it’s essential to learn to identify the fishing lure by its features rather than its appellation.

The principle of the chatterbait is straightforward. The blade attached to the lure vibrates inside the water column and creates motions that move the skirt back and forth like a life lure. They are especially effective imitators, which is why bass are quick to notice and take the bait. 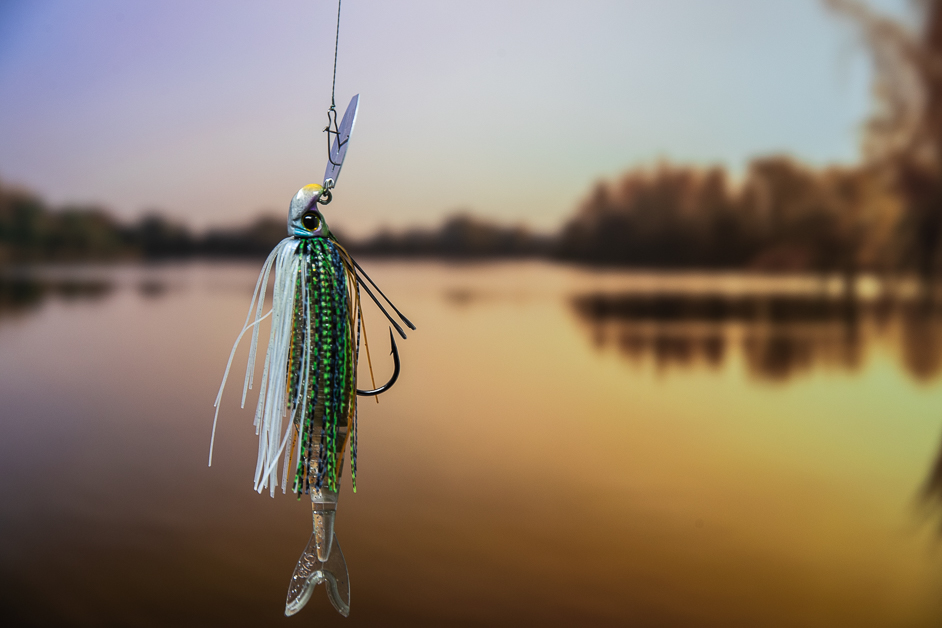 Rigging a chatterbait is easy enough, even for amateur fishermen. Typically, the jig comes pre-rigged with a skirt. You can also add a soft plastic trailer to add some bulk, which will keep the lure moving slowly and actively to attract bass. If you prefer to be involved in the creation process, you will need to acquire a jig head, a blade, a split ring, a wire, and a wire snap. Using split ring pliers, attach the split ring to the blade and then to the eye of the jig head. You’ll need to add the wire snap to the blade before you apply the skirt over the hook, up the shank of the hook, and against the jig head. This process will give you more flexibility in terms of chatterbait design. However, there are already plenty of versatile designs around!

You want a strong knot to hold the chatterbait and withstand the vibrations. A Palomar knot is fast, easy, and strong, but if you’re not confident in your tying technique, a loop knot is a suitable alternative. Pro angler Brett Hite designed the Jackhammer chatterbait knot which lets the blade chatter loudly without affecting the movements.

The ideal chatterbait setup will include a medium rod with a fast tip, typically 6’-6” or 7’-0”. Lighter chatterbaits underneath 3/8oz will work best with a shorter rod. Add a reel with a 6.3:1 ratio or higher. Most anglers opt for a 15-17lb fluorocarbon line, but this setup is best suited for clear water. If you’re fishing in muddy water, you would be more successful with a 30lb braided line. Chatterbait trailers are optional but they can significantly increase your catch rate. Add swimbait trailer during spawning season, and a craw trailer outside of spawning.

How to Fish a Chatterbait

You want to cast your chatterbait out in shallow to mid-depth areas that have plenty of structure for the bass to hide. Most anglers use a variety of techniques for chatterbait fishing, which always include these four methods:

A slow roll focuses on keeping the chatterbait down in the water so that bass can react to it. To achieve the effect, you will need to reel in as slowly as possible while still letting the blade thump in the water. Be careful not to be too sluggish as you reel as you still want your blade to vibrate. A slow roll is ideal for fish that are deep as you don’t want to bring the chatterbait close to the surface. Allow for slight pauses in the motion and a flick of the rod tip to give the lure a realistic action.

Fast-rolling is the opposite technique. Reel in quickly while keeping the chatterbait close to the surface. This will make the blade move along rapidly in a motion that imitates fleeing fish. This technique attracts aggressive bites. Use a fast retrieve to catch the bass.

Ripping is a technique you use when neither slow nor fast roll works. It’s best suited for fish that isn’t receptive or predatory. Ripping creates a sudden movement. You’ll need to reel the chatterbait very slowly through the top of shallows and with a flick of the wrist, you yank it free. Allow the lure to rip free once it hits the vegetation, and then let it sink again.

Pause n’ Go, or shaking, imitates injured baitfish. This is achieved by shaking the uppermost tip of the rod up, down, and all around as you retrieve. The jig head will dart around, making the skirt pulse and flare.

Check out this guide for a more in depth look at how to fish chatterbaits!

When to Fish with a Chatterbait

By definition, chatterbait lures go where a spinnerbait can’t. So, you want to cast your chatterbait out in shallow to mid-depth areas, making sure to avoid structure where the lure could get hung up. Chatterbait lures prefer shade.

The best time to use chatterbait lures is in the shallows when the fish is active through spring to summer and then summer through fall. Chatterbaits are best used when the water is cool and the sun is low. In summer, this would be early morning and evening, for instance. In fall, bass move to the shallow, so it’s the ideal time to run your chatterbait near the grass and wood targets. It’s worth noting that you can use chatterbaits to offer diversity against crankbaits and hardbody lures during the pre-spawn season. During spawning, chatterbaits are helpful to find where bass are hiding, so you can use them as searching lures for beds in thick cover. Post-spawn, chatterbaits can help locate fish that hasn’t yet left the bed to their summer location.

Hopefully, this guide to chatterbait fishing can give you all the information you need to get started and catch bass in most situations throughout the year.